Back to the Classics Challenge 2021 – P.G. Wodehouse 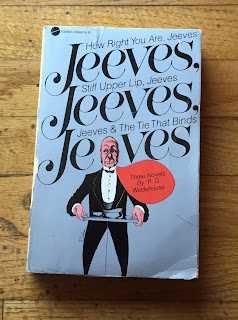 I chose to read some Wooster and Jeeves for the category “Classic Humor or Satire”. I’ve seen a few episodes of the hilarious adaptations starring Hugh Laurie and Stephen Fry but had never read any Wodehouse before. And here I had this chunky  bind up that I bought at a library sale or Goodwill years ago, just begging to be read.  I am so very glad I took the plunge - they were so very, very funny!

The below listed three titles are sequential but late in the series, published in 1960, 1963 and 1971 respectively. There is a lot to be gained reading them in order, I believe, since there is usually a little throw back to events and characters in previous novels and when I reached the third book, I was laughing out loud while reading.

So now my plan is to read all the Wooster and Jeeves novels in order. It won’t take me too long to achieve this – a couple of years maybe. There’s a total of 16 novels I believe, but the individual books are fairly short – under 300 pages.  The plots are pretty much all the same, Bertie gets into trouble, usually meaning well, and Jeeves gets him out of it. Some of the humor is in that repetition.

How Right You Are, Jeeves

When Bertie Wooster’s valet, Jeeves, takes a holiday, Bertie heads down to Brinkley Court to stay with his Aunt Dahlia. Dahlia wants Bertie to prevent her goddaughter, Phyllis Mills, from marrying the American playboy Willie Cream, both of whom are also staying at Brinkley Court. Also guests of the manor are Willie’s mother, the thriller writer Mrs. Homer Cream, a novelist, Phyllis step-father, Aubrey Upjohn who unfortunately was also the headmaster at Bertie’s boarding school and has a long memory, and the spunky Roberta “Bobbie” Wickham who tends to get Bertie in trouble whenever she is around. The ridiculous plot thickens and Bertie gets into all kinds of trouble due to both Bobbie and his own silliness.

Bertie is induced to return to Totleigh Towers despite the fact that its owner Sir Watkyn Bassett once jailed him for a college prank and frankly can’t stand him. Also, Sir Watkyn’s daughter, Madeline, has vowed to become Mrs. Wooster if her current engagement to Gussie Fink fails. When that affiance is threatened, Bertie has no choice but to enter the lion’s den and patch up Gussie and Madeline’s relationship to avoid dreaded matrimony himself. Of course, many other hijinks ensue: Bertie is (falsely) accused of theft and then kleptomania, spends a night in jail; Jeeves impersonates a Scotland Yard Chief Inspector; a garish alpine hat is sacrificed.

Jeeves and the Tie That Binds

We learn that Jeeves belongs to a club for manservants in which pertinent details of their employers are committed to a book “to inform those seeking employment of the sort of thing they will be taking on”. Bertie is afraid that the book (with an incredible 18 pages devoted solely to him) will fall into the wrong hands. For once, Bertie isn’t wrong. Jeeves and Wooster go to stay at Aunt Dahlia’s with the aim of helping Bertie’s old pal Harold “Ginger” Winship who is standing for Parliament in the by-election at Market Snodsbury. Unfortunately, Ginger’s impetus for politics is his fiancée, Florence Cray, one of Bertie’s old paramours. Also staying at Brinkley Court is Madeline Bassett and her suitor, Lord Sidcup, one of Bertie’s avowed enemies. Without any spoilers, this is the novel where Bertie finally commits to a relationship.