BACK TO THE CLASSICS 2017: ONE DAY IN THE LIFE OF IVAN DENISOVICH BY ALEXANDER SOLZHENITSYN 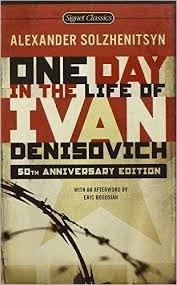 My first completed read for the Back to the Classics Challenge 2017 hosted by Karen at the blog Books and Chocolate is for the category A Russian Classic. I read the very short (139 pages in the Signet paperback edition that I read) One Day in the Live of Ivan Denisovich by Alexander Solzhenitsyn.  I had read Solzhenitsyn’s The Cancer Ward many years ago and thought it was fantastic and One Day in the Live of Ivan Denisovich also did not disappoint.
Like the title indicates, this is the recitation of one man’s day, from when he wakes in the morning to the time he goes to sleep, as an inmate of a Soviet prison labor camp in Siberia under Stalin’s regime.  It is both horrific and absurd in its depiction of life in the gulag and the lengths that one must go to to survive.  From the moment he wakes, Ivan Denisovich Shukhov is calculating how to make the most of opportunities, from cadging tobacco off of better-off inmates, to rejoicing over an extra three ounces of bread at dinner.  “Who’s the zek’s [prisoner] main enemy? Another zek. If only they weren’t at odds with one another – ah, what a difference, that’d make”.
There are hierarchies among the prisoners and hierarchies among the guards that must be observed; internal prison politics that must be respected; opportunities must be quickly assessed and taken advantage of, often at another’s expense and all this while living in inhumane conditions, under-fed, overworked and with little protection against the sub-zero temperatures.  But what makes this book fascinating, however, is Ivan Denisovich’s practical and accepting attitude toward it all and his small moments of joy and satisfaction over small pleasures and victories. The simplicity and matter-of-fact quality of the narrative belie the brutal and inhumane environment to which the prisoners are subjected.
Even though the book is fiction, Solzhenitsyn did actually spend 11 years in a Siberian forced labor camp, so this is really a true-to-life dystopic novel of sorts. Apparently, the book was not suppressed in the USSR (my book has an introduction, a forward AND an afterword!) but  was actually used by Khrushchev as part of his anti-Stalin campaign when it was first published in 1962.