Back to the Classics Challenge 2021 - The Wind in the Willows 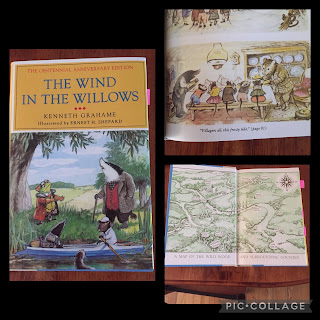 I need to get crackin' if I am going to successfully complete the Back to the Challenge this year. I am reading the books just fine. But when it comes to actually blogging about them, I am challenged.

Apparently in a different edition from the one I read, the intro/afterword by Jane Yolen points out that The Wind in the Willows is really three distinct sets of stories: (1) Mole and Ratty, (2) the Adventures of Mr. Toad and (3) the Pan interlude.  I found this break down to be completely accurate and as an adult, I much preferred the snuggly comforts of Mole and Ratty. There’s lots of eating and being cozy and warm by the fire in their chapters. Mr. Toad, while amusing, is likely going to appeal more to readers who are children.  Toad is very naughty and usually gets away with whatever he gets up to, despite his occasional attempts at repentance.  The Pan chapter reminded me of C.S. Lewis in its religious overtones and it is actually the part that gives rise to the title of the book.

According to the introduction by Margaret Hodges in the edition pictured above that I read (with absolutely stunning illustrations by Ernest H. Shepard), the book was written for Kenneth Graham’s son and was based on bedtime stories he made up for the boy.  Mr. Toad, is in fact based on the young Alistair Graham as a small child, which accounts for much of Toad’s petulant and impulsive behavior…if you have ever met a four year old human, you will know what I mean.  And I did like Mr. Toad’s adventures and found them occasionally laugh-out-loud funny – particularly when his mansion is overrun by piratical stoats and weasels.

I can also understand why, when this book has been adapted for stage and screen, that only the Mr. Toad parts are included in the adaptation. Mole and Ratty’s tales are really just a succession of meals and naps. But that isn’t to down play them at all. They were absolutely my favorite part and I spent a lot of time thinking about just how I would arrange my cozy den if I were an anthropomorphized mole, water rat or badger. As someone who falls somewhere on the very introverted side of humankind, good friends, delicious meals and a comfortable bed are paradise –just add books to make it perfect. It is interesting that Mr. Toad is the only character who actually gets a proper, human like house, which is spacious, multi-storied and rambling, not close and warm. It also helps that I read this back in February. It doesn’t get that cold in my part of Southern California, but February is typically rainy and, in the evenings at least, chilly. This is a wonderful book to snuggle up to.

I read this for the Back to the Classics Challenge 2021 Children’s Classic category. Many thanks to Cleo at  for giving this book such a glowing treatment last year. It totally lived up to that post and my expectations.

Back to the Classics Challenge 2021- Orley Farm

“For many years this prosperous gentleman had lived at a small country house, some five-and-twenty miles from London, called Orley Farm. This had been his first purchase of land, and he had never given up his residence
there, although his wealth would have entitled him to the enjoyment of a larger establishment. On the birth of his youngest son, at which time his eldest was nearly forty years old, he made certain moderate provision for the infant, as he had already made moderate provision for his young wife; but it was then clearly understood by the eldest son that Orley Farm was to go with the Groby Park estate to him as the heir. When, however, Sir Joseph died, a codicil to his will, executed with due legal formalities, bequeathed Orley Farm to his youngest son, little Lucius Mason.” 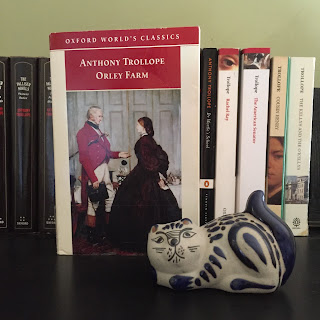 The above paragraph is the third one on page one, where Trollope sets up the major plot of the novel. That codicil to the will is contested but ultimately upheld and the mother of the infant Lucius Mason is able to keep Orley Farm for her child and away from the grasping hands of her angry and covetous adult stepson, Joseph Mason Jr. However, some 20 years later, the case is re-opened and the still beautiful Lady Mason isn’t so sure she has the strength to endure yet another lawsuit and trial. Lucius Mason has now reached his majority and wishes to be his mother’s defender in this matter and yet she refuses his assistance and instead relies on that of the family solicitor Mr. Furnival as well as that of their neighbor, Sir Peregrine Orme.

Ultimately, the question is less is Lady Mason guilty of forgery or perjury and more will she be found guilty of such at the trial. One of the larger questions Trollope is looking at in this novel is the amorality of the law and whether a lawyer is supposed to care more about the truth and justice than they are about their client’s innocence or lack thereof in the eyes of the law.

Also, of course, there are also multiple romantic subplots and much gentle humor among the handwringing drama. This is a Trollope novel, after all. I found it interesting that Trollope introduces some lower class characters into Orley Farm with the commercial travelers, Mr. Mr. Kantwise and Mr. Moulder. It isn’t unheard of in his novels, but usually he sticks quite closely to the upper middle and upper class in his books. Another interesting character normally not seen in a Trollope novel is the “moulded bride”, young Mary Snow, the low born fiancée of the impoverished yet brilliant lawyer, Felix Graham. Felix, who becomes part of Lady Mason's legal team, is involved in a sort of love quadrangle between himself, Mary Snow, the beautiful Madeline Staverly and young Perry Orne, grandson of Sir Percival. Also among the potential romances are the shenanigans of Lucius Mason and the wily and sly Sophia Furnival and Madeline's brother, Augustus.

I really enjoyed reading Orley Farm. It is a very long novel, but those are often my favorites from Trollope…wherein he introduces many subplots and characters with whom I can get acquainted and involved. There is also some nice continuity with other novels with Mr. Chaffenbrass, another member of Lady Mason's defense, who was previously seen lawyering in The Three Clerks and Phineas Redux.

I totally gave in to my whim and read Trollope for the Back to Classics Challenge 2021 category “Classic by a Favorite Author”. Unfortunately, in this book as in so many others, Trollope betrays his ugly anti-Semitic attitude, which is a real black mark on him. Not uncommon for the time but I feel I should always call Tony out on this, because there were writers and other people of that era who were not nasty anti-Semites, regardless of the prevailing sentiment. Despite this flaw, Trollope remains next to Charles Dickens, my favorite Victorian novelist. Once a reader is in his thrall, there is no going back, I fear.