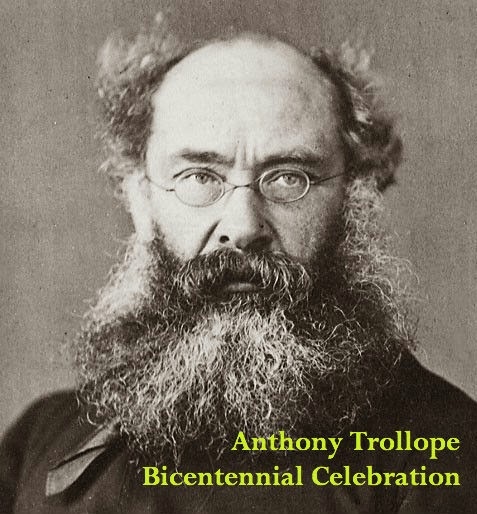 So much of what I read and/or hear about in the book world is focused on the new; the latest title or author. And it can be rewarding and fun to read the buzzed about book and know what everyone is talking about.  But it is equally rewarding to “discover” older books which have stood the test of time. In particular, I find I have an affinity with Victorian novels.  I had read The Moonstone and The Woman in White by Wilkie Collins back in college and really enjoyed both books, but for some reason I had the idea that Dickens would be “too difficult” (he’s not).  And Trollope? Frankly, I had never even heard of him, which is just nuts, because Anthony Trollope wrote over 45 novels, plus short stories, plays and non-fiction.

Karen at Books and Chocolate is hosting a Bicentennial Celebration in honor of Anthony Trollope in April  Anthony Trollope Bicentennial and I hope to take part and read and review at least one title. I have already read the first three books in the Barshetshire Chronicles but I thought for this particular event, I would try one of his stand-alone books. I have acquired copies of The Way We Live Now, He Knew He Was Right and The Three Clerks. It would be too ambitious of me to think I could get to all three by April…but maybe two? We’ll see.
Posted by Ruthiella at 5:10 PM No comments:

Someone at a Distance by Dorothy Whipple

My second choice for the Back to the Classics 2015 challenge hosted at  http://karensbooksandchocolate.blogspot.com/  is Someone at  a Distance which ticks the box for  the “Forgotten Classic” category.  In order to determine a forgotten classic, Karen suggested using goodreads to find books that have less than 1000 ratings or looking at the publishing catalogs of imprints such as NYRB, Virago and/or Persephone which specialize in re-publishing books and authors that have fallen into obscurity. From a Distance is a twofer, since it has under 700 ratings on goodreads and was re-published by Persephone in 1999. This is the second Whipple novel I have read, the first being The Priory, which I read last year and simply did not want to end, it was so enjoyable and I was entirely caught up in the story.  Someone at  a Distance wasn’t quite as fantastic as The Priory for my tastes, but it was nonetheless good.

I don’t want to get too much in to the plot, since I don’t want to spoil anything.   Whipple wrote domestic dramas and Someone at a Distance falls more on the side of melodrama.  However, it was a real pleasure to read even if the story isn’t too original. The book opens with the elderly widow Mrs. North who has been accustomed to being catered to her entire life. Now in her dotage, she is rather bitter and bored, even though her son and daughter-in-law live only a short distance away.  So she takes on a young French woman, Louise, as a companion for a few months. It is Louise's introduction which establishes most of the conflict in the novel, as she inveigles her way in to first Mrs. North's life and then into the rest of the family's, all the while neglecting her own doting parents back in France.

I loved Louise, even though she was detestable. And that is really a testament to Whipple’s writing, because  all of the characters, even if their actions were deplorable or unduly self-sacrificing, were understandable and fully rounded, I thought.

Someone At a Distance also has a slight feminist slant, which I think was also discernable in The Priory.  In both books certain female characters are faced with the dilemma of having to support themselves outside of marriage, a situation which offered few feasible solutions for many women in the early and mid-20th century.
Posted by Ruthiella at 10:51 AM 1 comment: