Back to the Classics Challenge 2021 - A Grain of Wheat

Verily, verily I say unto you, unless a grain of wheat fall into the ground and die, it abideth alone; but if it die, it bringeth forth much fruit. John 12:24 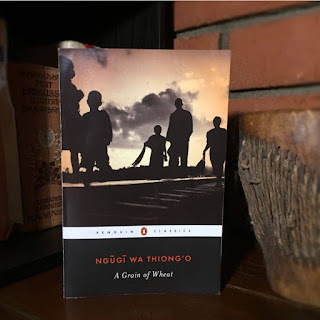 My first novel by Ngũgĩ wa Thiong'o but definitely not my last. Ngũgĩ came to my attention sometime around 2010 when I was becoming better acquainted with book prizes and he was rumored to be a front runner for the Nobel Prize in Literature for that year. Mario Vargas Llosa ended up winning instead, but perhaps Ngũgĩ wa Thiong'o will win it in the future at some point.

Set on the even of Uhuru (Freedom), Kenya’s official freedom from the colonial powers of the British Empire in 1963, the story is more or less of centered around the reclusive Mugo. Mugo is so introverted and quiet that those around him fill his silences with what they want to think and hear. What they don’t know is that Mugo is harboring a secret that has been plaguing him for many years, driving him even more away from village society and into a self-imposed isolation.

Apart from but also connected to Mugo are Gikonyo, a local business man, his wife Mumbi and his rival, the Karanja, who works at the local research station and who is considered a collaborator since he did not fight but worked for British during the war. Mumbi was sister to Kihika, a local hero and Mau Mau freedom fighter who was betrayed which lead to his capture and hanging. The village leaders are trying to get Mugo to give a speech at Uhuru because they believe him to have been a fervent supporter of Kihika and in his own quiet way, a hero of the rebellion. All the characters come to Mugo, in part to try and convince him to speak, but also to confide in him their own troubles and cares. Because Mugo is so quiet, they assume he is sympathetic to them and their feelings. Everything comes to a head on the day of Uhura when old rivalries are settled and the truth about Kihika is revealed.

There is a much smaller side story of the white district officer, John Thompson and his unhappy and unfaithful wife, who will be leaving Kenya after independence because he frankly does not want to be subject to and governed by blacks. His story intertwines with the others because during the war of independence, Thomson was an officer at a detention camp where Mugo was held.

I really enjoyed this book. It was a great look at Kenya and its history, looking very much at its future and already noting the cracks in the foundation of self-rule. To paraphrase The Who, “meet the new boss, just the same as the old one”. And what to make of this biblical analogy of the death of the seed which brings life to the plant? Is Ngũgĩ using this to remind the reader that the death of colonialism will bring forth the flowering of Kenyan independence?  Or is he referencing the death of the rebel leader Kihika who will bring forth the fruits of self-rule which was achieved in part because of his sacrifices? It is interesting to think about.

I had to read this book quite carefully, because there were a lot of subtle time shifts in the narrative. Also, there was the occasional use of untranslated Kikuyu/Swahili and Kikuyu names took some getting used to in order to differentiate one person from another. But I really enjoyed that aspect of the book because it made the experience more immersive.

I read this for the Back to Classics Challenge 2021 category “Classic by a POC author”.