Back to the Classic Challenge 2018: The Old Curiosity Shop by Charles Dickens 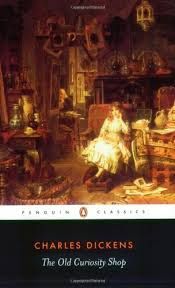 Possibly my favorite category on the Back to the Classics Challenge hosted by Karen at Books and Chocolate is to read a book from the 19th century because I love Dickens and Trollope and look for any excuse to read them.  This year I chose The Old Curiosity Shop by Charles Dickens, published in 1841.

According to the introduction by Norman Page of the Penguin Classic edition that I read, The Old Curiosity Shop was not intended to be serialized but rather was meant only be a short story about the inhabitants of a  London curiosity shop related by the fictional Master Humphrey  in a periodical titled “Master Humphrey’s Clock”.   But Dickens’ reading public didn’t want short stories narrated by Master Humphrey; they wanted a novel about Little Nell and her Grandfather from the shop.

And so the author obliged them by writing a story about Little Nell and her Grandfather’s quest to escape the clutches of the evil money-lender Quilp.   Quilp tries to mastermind their retrieval with the help of the obsequious lawyer Samson Brass, Brass’ sister Sally (who may be a villainess but is still a better lawyer than Samson though not allowed to practice due to her gender), and Nell’s ne’er-do-well  brother Fred.  Tangentially allied to this side is also Fred’s drinking buddy Dick Swiveller.  On side of righteousness is Nell and Grandfather’s former servant Kit who is thrown out of a job when they leave London but who regains his fortunes and finds support in the most unlikely corners. As usual, Dickens loves writing about coincidences and chance encounters. Most of his novels in my experience couldn’t happen without them!

As often is the case with Dickens’ novels, the bad guys are the most interesting characters. Little Nell honestly does not have any personality other than her saintliness.  My favorite character was Dick Swiveler. As his last name suggests, he is able revolve or pivot and his character arc, while only a small part of the novel as a whole, was most interesting to observe.

I only have two more Dickens' novels to read: Dombey and Son and Barnaby Rudge.  I would rate The Old Curiosity Shop on the lower end of my personal list. While all Dickens novels revel in sentiment, I personally found that this one was particularly obvious in its depiction of good vs. bad.    This observation should be taken with a grain of salt, however, because essentially I adore Dickens and think he is a genius. His least successful effort is well worth reading in my opinion and The The Old Curiosity Shop was wildly popular in its time.

Email ThisBlogThis!Share to TwitterShare to FacebookShare to Pinterest
Labels: BACK TO THE CLASSICS 2018, DICKENS
Newer Posts Older Posts Home
Subscribe to: Posts (Atom)