Back to the Classics 2017: The Red and the Black 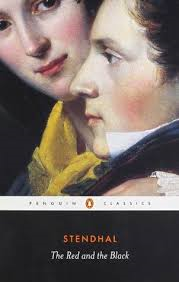 I chose The Red and the Black for the category of “Classic in Translation” for the Back to the Classics Challenge 2017 hosted by Karen at the blog Books and Chocolate .

First published in 1830, The Red and the Black reminded me of Crime and Punishment in its psychological excavation of the human mind and the conflicting emotions present in one person.  But I appreciated Dostoyevsky’s novel much more, although I can’t exactly pinpoint why.  My feelings about The Red and the Black may be akin to how some readers really hate Wuthering Heights and its tortured, unpleasant lead characters.  In the introduction written by translator Roget Gard in the Penguin edition that I read, he suggests that like Jane Austen’s Emma, Julien Sorel, the hero of The Red and the Black, is a creation that perhaps only the author can truly love and appreciate.

First, let me say that I enjoyed Emma and Wuthering Heights.  And I am glad to have read The Red and the Black. I do understand that no one in this novel is actually supposed to be particularly sympathetic to the reader, but I didn’t find any of main protagonists particularly interesting either. Another stumbling block for me was the (now) historical setting. While the Penguin edition that I read pictured above did have excellent notes by Roger Gard, Stendhal clearly expected his readers to be familiar with 1829 French politics and the then recent restoration of constitutional monarchy after the upheavals of the French Revolution and the First Empire. Had I a better understanding of the historical nuances, I think I would have understood more of the book’s satirical aspects.

The story is about Julian Sorel, the son of a carpenter in a village at the foot of the Jura Mountains. His father and his brothers abuse him for wanting more than the life of a mill worker.  Julian is physically very attractive and actually crazy smart (has an eidetic memory) but he is not well educated academically nor is he socially adept, which is a big drawback for an ambitious man in hyper-class conscious 19th century France.  He first believes his only way up and out of the peasant class is through the Catholic Church but he resents the fact that under Napoleon I, had he been born a mere 30 years earlier, he could have distinguished himself militarily despite his plebian background. Julian has almost a literal Napoleon complex, although his “shortcoming” is not his height but his shame about his origins.

As the book progresses, the reader sees how Julian achieves and fails to achieve his ambitions. I think what made him maddening to me as a character is that he is basically a prick. He does stuff, like seduce the wife of his employer, not because he loves her but because HE CAN.  Who doesn’t know people like that today?  So I think my real “complaint” is that the book is too well written really. This is a realist novel which feels very modern; fashion and politics have changed some in the almost 200 years since the book was written, human nature has not.
Posted by Ruthiella at 11:53 AM 9 comments:

BACK TO THE CLASSICS 2017: DRAGONWYCK BY ANYA SETON 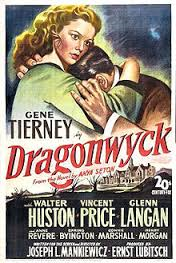 “A delicious sensation of comfort lapped around her, enfolding her as softly as did the immense bed. The sheets were of linen so fine that they felt like silk and they were also scented not with lavender but with rose petals and verbena”.
That is a description of Miranda’s first night at Dragonwyck, but it also made me think of the satisfaction one gets from reading a good gothic romance:  comforting yet indulgent.  Miranda is a young woman living in 1844 rural Connecticut who dreams of a sweeping romance that she secretly reads about in novels. In her heart, she feels she is destined to more than the hard life of a farmer’s wife. When her distant relation, Nicholas Van Ryn, invites her to his estate, Dragonwyck, located in the Hudson valley, Miranda senses this is the escape she has waiting for; the door to the life she deserves.
Since  Dragonwyck is a gothic romance in the tradition of Mary Stewart or Daphne Du Maurier, the reader soon discovers, as Miranda meets her cousin and sees the estate, that this will be no Cinderella story.  Nicholas is both charming and sinister and Miranda feels herself drawn to him, despite the fact that he is married and far, far above her station socially.
In addition to being a traditional gothic novel, Dragonwyck is also a historical novel which highlights not only better known events such as the Mexican-American war, but also (to me at least) more obscure occurrences such as  the Astor Place Riots in New York City.
I learned in the afterword written appropriately by the doyenne of historical fiction, Philippa Gregory, that Dragonwyck, first published in 1944, was only Seton’s second novel, which I think shows a bit. It was a fun read and I was compelled to turn the pages. However occasionally I found the insertion of historical events and persons to be a little awkward and the plot could have used more polishing in places. I do think, however, that Seton excels in characterization. Miranda was believably naïve yet ambitious and Nicholas is completely mesmerizing and chilling with qualities that seemed almost vampiric at times.
I read this for the Romance Classic category in the 2017 Back to the ClassicsChallenge at the blog Books and Chocolate and I chose it because of Lark's intriguing review. I could have also put it in the Gothic Novel category but since straight up romance is not my favorite genre (and I have read all of Austen’s novels), I thought this would be a good compromise! The above picture is actually from the movie, which I have not seen. For me, casting Vincent Price as the handsome Nicholas Van Ryn doesn't work!