JUST UNDER THE WIRE.  Well, not really. There are still 5 days left in the year.  ☺  But I am currently reading furiously books from the 2018 Tournament of Books long list plus there is the usual end of year/holiday activity so I did actually cut it a little too close for my comfort this year!

Below are the 12 books I read for this challenge, with links to my reviews.

1. A Russian Classic: One Day in the Life of Ivan Denisovich by Alexander Solzhenitsyn
2. A Romance Classic Dragonwyck by Anya Seton
3. A Classic in Translation : The Red and the Black by Stendhal
4. A 19th Century Classic:  Nicholas Nickleby by Charles Dickens
5. A Gothic Classic: No Name by Wilkie Collins and The Monk by Matthew Lewis
6. A Classic by a woman author: Less than Angels by Barbara Pym
7. An award winning Classic: The Yearling by Marjorie Kinnan Rawlings
8. A 20th Century Classic: Go Tell it on the Mountain by James Baldwin
9. A Classic About an Animal or With an Animal in the Title:  The Call of the Wild by Jack London
10. A Classic with a number in the title: The Three Musketeers by Alexandre Dumas, Père
11. A Classic set in a place you would like to visit: Picnic at Hanging Rock by Joan Lindsay
12. A classic published prior TO 1800:  The Oresteia by Aeschylus

My favorites were Nicholas Nickleby, No Name, Less than Angles and The Yearling.  My  least favorites were The Red and the Black and The Monk. I am glad to have read all of them however, and bonus points to me  for having read Go Tell it on the Mountain and The Call of the Wild which I can also now tick off my list of Modern Library 100 Best that I am making my way through.

Many thanks to Karen at Books and Chocolate for hosting and doing all the heavy lifting!

BACK TO THE CLASSICS CHALLENGE 2017: The Orestia by Aeschylus

For the last category of the 2017 Back to the Classics Challenge:  A CLASSIC PUBLISHED PRIOR TO 1800, I went  WAY before 1800,  about two thousand years earlier to 5th century BCE and read The Oresteia by Aeschylus.   Aside from a handful of plays in high school read and/or performed, the only play I have read in my life was Lady Windermere’s Fan, which I read for the 2016 Back to the Classics Challenge and which I found to be not only delightful but also very quick read.
The Orestia was not quick or delightful actually.  But the experience was interesting and worthy. What slowed me down was the essay by the translator Robert Fagles and W.B. Standford which preceded the plays which was almost as long as all three works put together. It was tough reading, very scholarly. But it added EVERYTHING to my understanding of the plays…without it I would have been pretty lost.  Really, my  only understanding of much of ancient Greek literature comes from the Psych 101 course I took in college over 25 years ago…and that was of course filtered through Freudian thought.
Briefly, the Oresteia is one of the many tellings (there are other extant versions of the story by Sophocles and Euripides for example) of the myth of the curse over the family of Agamemnon, he of the Trojan War fame.  In this version, Agamemnon has willingly sacrificed his daughter Iphigenia to the gods in order to win the war and naturally, his wife Clytemnestra isn’t happy about this. So she kills Agamemnon upon his return from Troy. Agamemnon is in turn avenged by their son Orestes, who kills his mother.  Orestes is then pursued by the Furies for matricide. This all comes to a head in Athens where the goddess Athena presides over a trial to determine if Orestes can be acquitted of his crime and the Furies pacified by becoming "The Kindly Ones" (or the Eumenides , which is actually the title of the third play).
According to Fagles’ interpretation of the trilogy, what Aeschylus was trying to do with the plays was to show his audience the civilizing effect of law on society  in the way the Furies are moved from a force of raw vengeance to a force for justice.  That is paraphrasing a 90 plus page essay, but that is basically my take away in a nutshell.
I am glad to have read it for its reverberations in later literature.  Let’s hope it pays off in my future reading. Already I am thinking of The Kindly Ones which is the title of the 6th book in Anthony Powell’s A Dance to the Music of Time series, which I read a few years ago.
Posted by Ruthiella at 11:07 AM 2 comments:

BACK TO THE CLASSICS CHALLENGE 2017: Picnic at Hanging Rock by Joan Lindsay 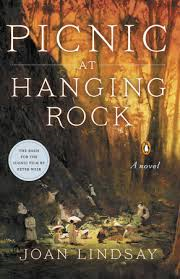 I chose Picnic at Hanging Rock by Joan Lindsay as my read for the Back to the Classics 2017 Challenge category “Classic Set in a Place You'd Like to Visit”.  I have never been to Australia and probably never will visit given the expense and the distance but I have long been interested in it as both a country and a landscape.  Picnic at Hanging Rock is a fiction, but Hanging Rock is a real volcanic rock formation located in Victoria, Australia.
The story features the students and teachers of a girl’s boarding school located a few miles from Hanging Rock, a popular local attraction for day trips and outings.   As the book opens on Valentine’s Day 1900, the girls and two of the teachers are preparing to go for a picnic at the rocks.   Later, however, party turns tragic, when three girls and one teacher go missing. This mysterious event affects not only the remaining staff and students but also two young men who happened to also be at Hanging Rock that days; some of the ripple effects are quite terrible, while others are quite providential.
This is a very short book (198 pages in the pictured Penguin edition I read)  and it is structured as a faux-history/ true crime format which I found interesting.  In particular, the ambiguity in the book really worked for me and the lush, atmospheric writing was a pleasure to ponder and digest. I think there is a lot of subtext in the book, for the reader who cares to look for it. I was especially drawn to the author’s depiction of the natural world as something independent and uncaring of humans, but always present and threatening.  However, there is an actual “ending” to the book which was cut from the manuscript when the book was first published in 1967 which somewhat takes away the ambiguity I so enjoyed and definitely pushes the book in to speculative fiction territory.

There is also a really good film of Picnic at Hanging Rock directed by Peter Wier.  It is pretty good, as I recall; very atmospheric and creepy.
Posted by Ruthiella at 9:03 PM 12 comments: