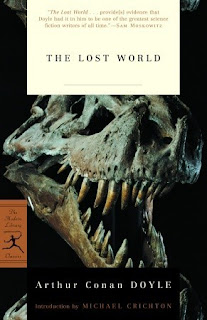 I read The Lost World as my Adventure Classic for the Back to the Classic Challenge 2016 at the book blog Books and Chocolate.


The reader’s enjoyment of The Lost World will definitely depend upon her (a) suspension of disbelief and (b) her ability to look past the racial stereotypes of the Victorian/Edwardian era.  Arthur Conan Doyle is, of course, much better known for Sherlock Holmes than for the adventures of Professor Challenger, who  is introduces in this book and who went on to be featured in two further novels and two short stories.  The Lost World was a fun sort of romp in its way, but I doubt I will ever read any further adventures of Professor Challenger. Personally, my window to have read and really enjoyed this type of book was probably some time in my tween to early teen years, back when I did read a couple of Jules Verne and HG Wells books.


The book is very short (less than 250 pages) and the plot is fairly simple: Professor Challenger, a pompous yet intelligent bull of a man, alleges to have discovered a land that time forgot somewhere deep in the Amazon, but no one believes him because all of his evidence was accidentally destroyed upon his return. Intrepid newspaperman E.D. Malone, always on the lookout for a good story, is also seeking out a daring and dangerous assignment in the hopes of impressing the woman he loves.  Malone, along with big game hunter Lord Roxton and biologist Professor Summerlee, band together to travel to the Amazon to try to either prove or disprove Challenger’s claim. Adventure ensues!


As I mentioned above, there are more than a few unfortunate racial stereotypes to be found in the book, along with attempted genocide, slavery, and a general belief in the superiority of “civilized” white Europeans over any other group. I can’t put my finger on why these attitudes bother me in some books but in others (like The Secret Garden), they do not.   What I did enjoy about The Lost World was the sense of adventure and discovery expressed in the story.   It is hard to imagine today that there is a square foot of the earth’s surface that hasn’t already been surveyed and catalogued but I think a person at the turn of the 20th century could very well conceive of an undiscovered island or plateau just waiting for scientific discovery and research.  I also loved the illustrations (drawings and faked photos) in the book. I am a total sucker for that type of thing!


I don’t regret reading this at all, but as I wrote above, I think I read this book too late in life. I had a similar experience with two other Victorian classics: Dracula and The Strange Case of Dr. Jekyll and Mr. Hyde, but for different reasons.  I honestly enjoyed the forward written by Michael Crichton, in the Modern Library edition that I read shown above, more than I did the actual book.
Posted by Ruthiella at 4:48 PM 6 comments:

Email ThisBlogThis!Share to TwitterShare to FacebookShare to Pinterest
Labels: BACK TO THE CLASSICS 2016

THE SMALL HOUSE AT ALLINGTON by Anthony Trollope 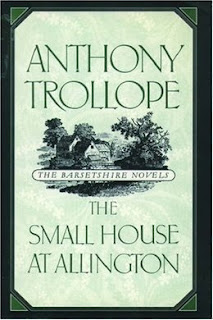 The Small House at Allington is the fifth book in Anthony Trollope’s 6 book Barsetshire Chronicles series and it was my choice for the category “A classic which includes the name of a place in the title” in the 2016 Back to the Classic Challenge hosted by Karen on the blog Books and Chocolate. With its emphasis on making a “good” marriage and its loose plot surrounding two marriageable sisters who are upper class but impoverished, the book reminded me a tiny bit of Austen, but still written in Trollope’s particularly endearing, witty style.
The story begins with an introduction of the Squire of Allington, Mr. Christopher Dale, who lives in the Great House; rejected by his beloved many years before, Squire Dale has never married. In fact, this type of stubbornness is supposed to be a Dale family trait and it will echo throughout the novel; once a Dale makes up his or her mind, they never go back. The squire’s heir is his nephew Bernard Dale, a young officer in the Engineer corps. Mr. Dale also has two nieces Lillian Dale (Lily) and Isabelle Dale (Bell) who live with their widowed mother in the Small House, more or less upon the squire’s charity. Their mother pays no rent for the use of the house and garden and the squire has financially aided his nieces from time to time, basically allowing them to be raised as if they were part of the landed gentry, when in fact they are poor relations and would have a much lower social standing if they had had to rely only on their mother’s small income.
When Bernard brings his friend Adolphous Crosbie to visit at the Great House, romance ensues. During this visit, the squire informs Bernard of his wish that Bernard marry Bell. Meanwhile, Crosbie, who is very charming but also exceedingly ambitions, falls in love with Lily, though he erroneously assumes that the squire will settle money on her upon her marriage. However, Lily is also loved by neighbor John Eames, a young, somewhat awkward man, just beginning to make his way as a clerk at the Income Tax Office in London.
For Trollope fanatics, there is also a small sub-plot involving Lady Dumbello (the former Griselda Grantley who was featured in the fourth book of the chronicles, Framely Parsonage), Mr. Plantagenet Palliser (who will figure in the the Palliser Novels I assume), and a lovely cameo by Mr. Harding of the first book in the series, The Warden.
In terms of the plot, I found that the book really represented a break from any previous Trollope novel I have read (which admittedly is not that many, just seven so far); I was so sure from the outset that I knew how it would end and I was so, so wrong. There is no neat bow tying up all the storylines by the last page, which is rare in my experience of Victorian romances in general.
In any case, I loved it. I particularly liked the portraits of Crosbie and John Eames, seeing where they paralleled and where they diverged; in fact I liked both characters a lot, even though they both behave very badly at times. And I also really enjoyed the Trollope take down of the aristocratic but morally bankrupt de Courcey family.
Posted by Ruthiella at 4:47 PM 5 comments: