Back to the Classics Challenge 2021 - Setting Free the Bears 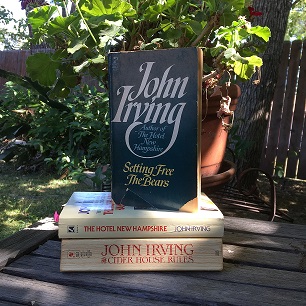 For the Back to the Classics 2021 category “Classic About an Animal or With an Animal in the Title”, I read John Irving’s debut novel, Setting Free the Bears which I have owned for many years... ahem… decades.  I think like a lot of readers, if they have read any Irving at all, the first Irving I read was The World According to Garp, after seeing the movie which came out in 1982. For many years thereafter, up to the late ‘90s I was a huge Irving fan and had read his novels (six) published between 1978 and 1998.  I wouldn’t say I am no longer a fan, but for whatever reason, I stopped reading him in the new millennium; well, until recently.

Anyone who has read a few Irving novels will notice some of his signature trademark tics across his books: Vienna, bears, wrestling, orphans, bizarre deaths, etc. Not every book has every peculiarity in it, but they all have his special brand of epic tragicomedy I believe, at least the seven that I’ve now read. I didn’t encounter any Charles Dickens until 2005, but after having re-read The Cider House Rules in 2019 and now Setting Free the Bears for the first time, it is clear to me that “Dickensian” is an adjective that can be applied to Irving’s novels.

Published in 1968, Setting Free the Bears is a frame story narrated by Hanne Graff, a Viennese university student. When Hanne flunks out of university, he takes up with the slightly unhinged Siggy Javotnik, a radish eating, salt stealing maniac, and they decide to take a motorcycle road trip. Their goal is to go all the way to Italy and the coast. The opening and closing of the novel are set during their journey in present day mid-1960s Austria, but the middle section is the life history of Siggy’s parents during World War II interspersed with Siggy’s current day obsessive plans to free the animals from the Vienna zoo (hence the title). Also central to the story is a young woman Hanne meets along the way called Gallen at an alpine hotel. Basically, however, Hanne is the straight man to the farcical Siggy and the real story within the story is the history of the Anschluss in 1938 when Nazi Germany annexed Austria and the politics and betrayals of the partisan guerilla forces in Yugoslavia during and after the war.

The book has its charms and hit a number of the Irving markers (Vienna, bears, orphans) but on the whole, I found it awkwardly plotted, often stilted and generally it felt overly long. All John Irving books are pretty chunky, but as a reader, I don’t normally feel it; in this one I did. I think this book is maybe best left to Irving completists, though possibly had I read it a few decades ago at the height of my love for Irving I would have liked it more. I suspect some of what made it awkward and long was just the creakiness of a debut novel.  Irving was warming up to hit his later stride starting with Garp. I am glad to have read it, however. I particularly appreciated learning more about the annexation of Austria by Germany in 1938 and the political makeup of Yugoslavia under Nazi occupation. I’d never heard of Draža Mihailović and the Chetniks but I think I should have, as should everyone. He was on the cover of Time in 1942, for goodness sake! Google him, I ask you all, if you’ve not heard of him.