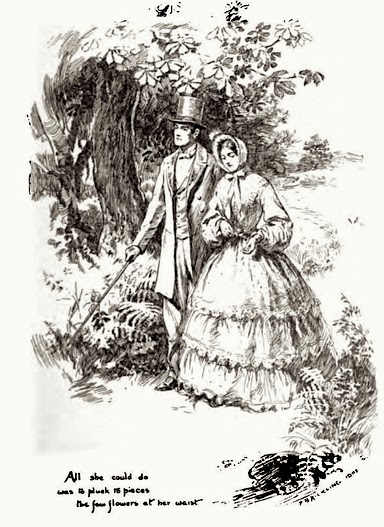 My second read for the Trollope bicentennial being celebrated at Books and Chocolate was The Three Clerks.  I just finished it yesterday, so just two days before the birthday bicentennial. Of the five books of his that I have now read, this is definitely my least favorite. Coming in at around 550 pages this is one of Trollope’s shorter (HA!) works.   The story revolves around three young gentlemen, all who work for the British Civil Service in London and their relationship to three young sisters who live a genteel, middle class life in Hampton, near London.


The two clerks who work for the office of Weights & Measures are Harry Norman who is hardworking and steady and Alaric Tudor who is very bright but exceedingly ambitious. The third clerk and cousin to Alaric is Charley Tudor who is genial, but lacks direction and discipline and who works for the Internal Navigation office, nicknamed “the Infernal Navigation” for its reputation of sloth and debauchery.


Harry and Alaric are at first fast friends and as such, Harry introduces Alaric to his cousins, Gertrude, Linda and Katie and their widowed mother, the lovable but slightly lax Mrs. Woodward. However, when a possible promotion at the office puts Harry and Alaric in direct competition with each other, their friendship begins to fray and eventually it falls apart based on a perceived betrayal that Harry cannot forgive. As the story progresses, Alaric begins his meteoric rise in the world, which ascension is not without peril due to Alaric’s hunger for power and prestige at any cost. Meanwhile, Charley sinks further and further in to debt and dallies with a bar maid, all the while wishing he could be a better man, but not knowing how to quite pull that off.


I think what put me off slightly in this case is that the title should really be “two and  a half” clerks, since Harry is so upstanding and is consequently fairly dull; Trollope had nothing much to write about him. For me, it made the narrative uneven since the same weight is not given to each storyline. Also, up to now, I have always appreciated Trollope’s fairly well rounded female characters, but with the exception of perhaps Mrs. Woodward and maybe Gertrude near the end, I didn’t find the female personalities to be particularly noteworthy. Linda and Katie were very one note, although I suppose Katie’s actions and passions were not atypical for a teenager.  Lastly, I found the last names of most of the minor secondary characters (the lawyer, Mr. Geitemthruet or the money lender, Jabesh M’Ruen) too over the top.


One thing I love about reading books written over 100 years ago is the feeling of déjà vu. You know, “Plus que ça change…” or the more things change, the more they remain the same.  In The Three Clerks there is a bit of a scandal about stock speculation based on a bridge intended to replace a perfectly serviceable ferry which never gets built. I totally though about the Gravina Island Bridge in Alaska, or the “Bridge to Nowhere” which was a bit of a catch phrase in the 2008 election year. There were lots of other similar observations about human behavior, politics, etc. that I made while reading, but that one really stuck out to me.


Unfortunately, the Penguin edition I read of The Three Clerks this time was not part of their classics series. So it was not annotated nor was there an introduction. I had to puzzle out the Latin quotations on my own, or just ignore them (usually the latter).  So instead I have used in illustration from one of the old-timey editions showing Linda and Alaric on a rather fateful walk.

Posted by Ruthiella at 1:00 PM No comments:

He Knew He Was Right 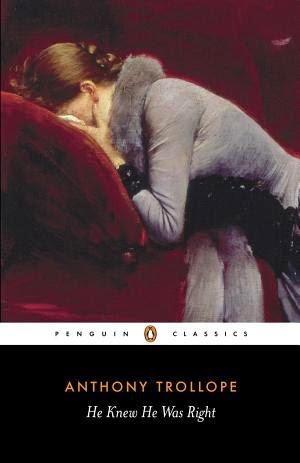 April 24, 2015 will mark the bicentennial of Anthony Trollope’s birthday and Karen at Books and Chocolate is planning a celebration on her blog  http://karensbooksandchocolate.blogspot.com/  to encourage her readers to pick up as much Trollope as possible by then.  I had planned already to read the forth book in the Barsetshire Chronicles this year as part of Karen’s Back to the Classics 2015 challenge, so I could have doubled up, but I felt that instead I should take this opportunity to read one of his stand-alone novels instead.


I ultimately decided on one of Trollope’s better known titles, He Knew He Was Right.  Louis and Emily Trevelyan are a young, wealthy couple with a small son. Despite the fact that both are fairly headstrong personalities, they happily married until a certain Colonel Osborn starts to give Emily rather more attention than a friend of the family who is old enough to be her father should in polite society. Emily isn’t too fussed since she is secure in her knowledge that she has not and never will stray from what is considered proper. However, Louis is bothered by Colonel Osborn’s attentions and what the whisperings of society gossips might think. Emily willfully misunderstands her husband’s fears as an accusation that she has behaved immorally. Louis willfully refuses to compromise or discuss the matter with his wife reasonably and insists that it is his right as a husband (this is the Victorian Era don’t forget) that Emily cease all contact with the Colonel. And from that misunderstanding and stubborn refusal their relationship begins to unravel.


At first I was worried that this novel would be 800 pages of a back and forth argument between a jealous husband and a headstrong wife, however, there are several other side characters with parallel story lines, almost all to do with marriage and courtship. These parallel narratives help break up the intensity of Emily and Louis’ disintegrating marriage and temper the tragic main plot with humor and romantic sub-plots. There are really too many supporting characters to mention, but probably the main ones are the Stanbury family. Hugh Stanbury is a friend of Louis who has given up all respectability by deigning to earn a living writing for a penny newspaper and who is in love with Emily’s sister Nora Rowley. Then there are Hugh’s unmarried sisters, Pricilla and Dorothy Stanbury who live with their widowed mother. And most amusingly, in my opinion, there is Miss Jemina Stanbury, Hugh’s maiden aunt who Dorothy goes to live with. Once I encountered Miss Stanbury, about 50 pages in, I knew this book would become a favorite. I just loved her as a character. She is petty, willful and obstinate, but can also be generous and kind when she wants to be. I thought she was a hoot.


He Knew He Was Right has fairly overt feminist undercurrents which touch on the absurdity and double-sided unfairness of Victorian upper/middle class society in its treatment of women. For many women, marriage was their only option for a secure future and but under the law, they had almost no rights within the marriage. So a bad marriage could be very, very bad for the wife, with little recourse for her to better her situations. And as so many have noted before me, Trollope’s female characters are so much more three dimensional than those in Dickens’ novels, which is always appreciated by me.  So, over all a really enjoyable and page turning read, in particular all the scenes in Essex, where Miss Stanbury lives. I always say I hate romance, but I sure loved this book which was virtually nothing but romance.  Go figure!


The image above is from the Penguin Classics paperback edition of this title that I read which is one of my favorite publishers for classics because the editions are annotated and contain an introduction (which I always read after I have finished the book for fear of spoilers, naturally).
Posted by Ruthiella at 5:19 PM 2 comments:

One Fine Day by Mollie Panter-Downes 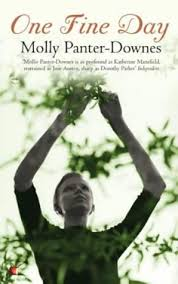 Typically I gravitate towards doorstoppers of books: long, involved, descriptive, etc.  However, I am often stunned (in a good way) when I read concise novels where an author has achieved so much in considerably less pages.  I have to give One Fine Day along with A Month in the Country by J. L. Carr, The Blue Flower by Penelope Fitzgerald and Mrs. Palfrey at the Claremont by Elizabeth Taylor a place of prominence on my figurative shelf of short novels that I personally have found to be brilliant and just as immersive as a 400+ page tome.
I read this book as part of the Back to the Classics 2015 challenge hosted at http://karensbooksandchocolate.blogspot.com/  as it fulfills the “Classic Novella” category.   I am not sure exactly what the line is that divides a novella from a novel, but Karen only criteria was that the book have less than 250 pages, so this fits.

Published in 1947, One Fine Day depicts a day in the life of a certain upper middle class family who live in a large house in the countryside outside of London.  There is no plot, nothing extraordinary happens really. However, every thought and observation is related in impeccable detail; every small moment echoes with larger story.  The writing is at times melancholy, at times wistful, at other times joyful.


The main focus of the book is Laura, a wife and mother, who despite her middle class upbringing, is at heart a little bohemian. She has a young daughter still in school and a husband who takes the train in to his office in London.   Laura’s dreamy, spontaneous nature is curtailed by her responsibilities in the post war era. Before the war, she had servants to manage the house and the housekeeping.   Two years after VE day, those who might have looked for a position of nanny, gardener, or cook prior to the war are now either dead or moving towards better paying, more liberating jobs in industrial areas.
Laura isn’t only person adjusting to life after wartime of course, everyone in the village is, for better or for worse. At home, her daughter Victoria and her husband Stephan are both only getting to know one another again, since Victoria was just a toddler when the war began and Stephan left to fight in Europe. Victoria is a little bit resentful of her father’s intrusion into the cocoon she and her mother developed while he was off fighting. And Stephan seems slightly bewildered by the small person his daughter has become, no longer a baby to be tickled or to give horse rides to.  And the same is true for Laura and Stephan and their marriage after such a long separation. After the first prayer of thanks that they have been reunited when so many have lost so much, they too have to adjust their expectations of each other, now that they are older and so much has changed in their mutual absence.

One Fine Day is a beautiful story told in small instances. The take away is that life moves on and we decide how we move with it; one can decide to appreciate each beautiful day as it comes or one can stay stuck lamenting a lost past that cannot be changed.

The edition of the book I read  (shown above) is published by Virago, a publisher that re-issues books primarily written by women which have fallen out of print. I am so glad they did for this title, because it was really an amazing depiction. I know that this book has been compared with Virginia Woolf and I think that that is fairly apt in Panter-Downes depiction of the rich inner lives of her characters.
Posted by Ruthiella at 5:33 PM 4 comments: