THE FRANCHISE AFFAIR BY JOSEPHINE TEY 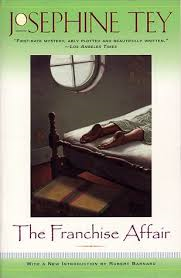 The Franchise Affair is the first book that I have completed for the 2016 Back to the Classic Challenge hosted by Karen on the blog Books and Chocolate and it fills the category of Classic Detective Novel. This is the fourth Tey mystery that I have read and I can say that I am impressed at how they each have been very different from each other, although I don’t think Tey is going to ever knock Agatha Christie of the pedestal on which I have placed her.

The book is billed as an Inspector Grant mystery (he of the famous Tey title Daughter of Time), but actually, he is barely in the story. Instead, the “detective” in this case is an amateur sleuth: Robert Blair is an unmarried, middle aged small town solicitor whose routine is rather thrillingly disrupted when a local mother and daughter are accused of kidnapping and forcing a 16 year old-school girl to work as a maid for them. To say more than that would be to spoil the plot!

I enjoyed the mystery side of the story alright. Although I did think it seemed a little familiar while reading and it turns out that The Franchise Affair is loosely based on a real event that took place in the 1700s (which is obliquely referenced in the book). I soon realized that I read a Guardian article written by Sarah Waters about The Franchise Affair ages ago. A little googling and I was able to find the link; it is really an excellent article: The Lost Girl - Guardian Article, but read it after reading the novel unless you want to get spoiled!

What I found a little hard to swallow about The Franchise Affair were characters who think they can tell a criminal by way a person’s eyes are set or by the shape of their forehead, etc., that smacks too much of pseudo-sciences like phrenology. So I read much of this book with an entire salt cellar. And as the Sarah Water’s article mentioned above explains much better that I ever could, there is a lot of virulent class prejudice and middle class fear of the lower class expressed in the story, which can be an unpleasant experience for a modern day reader.
Posted by Ruthiella at 4:59 PM 2 comments:

Email ThisBlogThis!Share to TwitterShare to FacebookShare to Pinterest
Labels: BACK TO THE CLASSICS 2016
Newer Posts Older Posts Home
Subscribe to: Posts (Atom)