Back to the Classics Challenge 2017: Less Than Angels 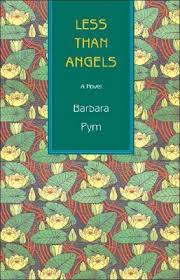 For the Back to the Classics Challenge 2017 (hosted by Karen at Books and Chocolate) for the category “Classic by a Woman Author” I decided to go with Barbara Pym’s Less than Angels, which was first published in 1955.

Less Than Angels more or less revolves around the lives and loves of a handful of anthropology students and their lecturers in 1950’s London.   I write “more or less” but really it is so much more.  One could consider Tom Mallow, the anthropology grad student who comes back to London after two years of field work in Africa to write his PhD dissertation to be the main character and the plot to be how he handles the three women who love him.   However, in my experience with Barbara Pym novels, plot is really secondary to the characters and the small world they inhabit within the wider macrocosm of London. Pym worked for an anthropological society in the 1950’s and 60’s, so not only does she understand her subject matter, but she also very purposefully observes academics and the middle class as if they were anthropological subjects in their “native habitats”.

Less Than Angels is the third Pym title I have read and I particularly enjoy her  understated style and subtle humor. One of Tom’s love interests is Deirdre Swann, anthropology undergraduate who is uncertain of her choice of study. Deirde lives at home in the London suburbs with her mother, older brother and Aunt Rhoda.  I loved Rhoda, who sneaks around at night correcting her sister’s housework like refolding towels or setting out the juice glasses for the next morning’s breakfast.  Another favorite minor character is the Swanns’ neighbor, Mr. Lydgate, semi-retired from the colonial service, who sometimes sits at home in his study with an African mask over his head, wishing he were back there. “He often thought what a good thing it would be if the wearing of masks or animals' heads could become customary for persons over a certain age. How restful social intercourse would be if the face did not have to assume any expression--the strained look of interest, the simulated delight or surprise, the anxious concern one didn't really feel.”

Were it not for the internet, I doubt I would have ever encountered Pym’s work. I first heard about her from Thomas at the blog Hogglestock in 2011.  She is definitely one of those lesser known writers who inspire profound love and devotion when she connects with the right reader.
Posted by Ruthiella at 9:04 AM 12 comments:

Back to the Classics 2017: Nicholas Nickleby by Charles Dickens 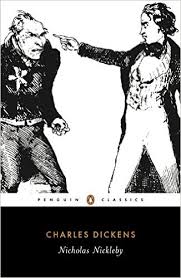 I have often heard readers say that Dickens was “paid by the word” and that is why his novels are so long, but I don’t think that is true.  I am fairly sure it has been documented elsewhere that due to his enormous creative energy, he was often working on various projects simultaneously.  So the “wordiness” and extraneous stories are likely due to little time devoted to laying out the plot beforehand in combination with the serialized nature of the publications.

I mention this because I noted that in the over 900 pages in the Penguin Classics edition of Nicholas Nickleby that I read, at least two story lines could have been cut without hindering the plot in any way.  Of course, this is neither here nor there if you love Dickens as I do and one of such plot lines concerning the proud, solidly lower middle class Kenwigs family was one of my favorites.  Probably inserted mostly for comic relief, Mr. and Mrs. Kenwig are determined that their children will do better than they have, “She will be a treasure to the man she marries, sir,’ said Mr. Kenwigs, half aside; ‘I think she’ll marry above her station, Mr. Lumbey.” says papa Kenwigs about his eldest daughter Morleena.  In fact, the family has pinned all of their hopes on Morleena inheriting her great uncle Lillyvick’s modest “estate”. Lillyvick is a water rate collector only slightly higher up the social ladder but unmarried and therefore heirless.

The main story line concerns the eponymous Nicholas who has to fend for his mother and younger sister when his father’s death leaves them penniless.   The family appeals to their rich yet miserly uncle Ralph , who has little sense of familial duty  or affection and pawns them off as cheaply as he can.  Nicholas is sent to work as an assistant to the brutish school master Wackford Squeeres  in Yorkshire where he befriends the poor, abused Smike.   Meanwhile, back in London, sister Kate Nickleby’s situation becomes more and more precarious and she has no one to turn to since her mother is self-absorbed and useless and her uncle uncaring and selfish.  Eventually Nicholas leaves Yorkshire under bad circumstances with Smike in tow, which firmly cements his Uncle Ralph’s hatred of him. The rest of a book is a winding account of Nicholas’ trials and travails as he seeks his own fortune and tries to protect those closest to him while battling his uncle’s dastardly plans to bring him to ruin.

One thing that set this title apart from other Dickens novels I have read is the character of Nicholas himself. He is quick to anger and to react, which gets him into trouble often.  I agree that Dickens’ female protagonists are generally pretty sketchy, but his male protagonists are also often fairly passive. In comparison to David Copperfield say or Pip from Great Expectations, Nicholas was anything but passive.   I also think that this book was particularly keen in terms of class consciousness and the arbitrary accesses and barriers it engenders. Not only do we have the Kenwigs and their aspirations, but there are also the social climbing Wititterlys who are Kate’s employers for a time, not to mention Mrs. Nickleby who is a complete snob.

I read this book for the category of A 19th Century Classic for the Back to the Classic Challenge  2017 hosted by Karen at the blog Books and Chocolate. Of the eleven Dickens titles I have read so far, this one will definitely be considered one of my favorites.  It has all the qualities I love about Dickens:  adventure, romance, compassion, sentiment and a sense of humor. In additional to the aforementioned Kenwigs family, I also adored the character of John Brodie, the bluff and generous Yorkshireman who comes to Nicholas’ aid more than once.
Posted by Ruthiella at 9:29 AM 11 comments:

Email ThisBlogThis!Share to TwitterShare to FacebookShare to Pinterest
Labels: BACK TO THE CLASSICS 2017, DICKENS
Newer Posts Older Posts Home
Subscribe to: Posts (Atom)