Back to the Classics Challenge 2020: Ubik 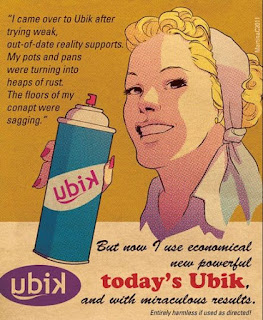 PKD was a weird guy. That’s my summation after having now read only two of his novels.  I chose Ubik for the Back to the Classics Challenge 2020 – “Read a genre classic”.

In reading this book, it became very clear right away that PKD had a lot of fun imagining what one would wear in his projected future. It is all pretty outlandish, such as:

“A young stringbean of a girl with glasses and straight lemon-yellow hair, wearing a cowboy hat, black lace mantilla and Bermuda shorts…”

Dick imagines a (colorfully dressed) world where telepathy and pre-cognition are commonplace. There are organizations created to harness these powers and other organizations that exist to curb them. Glen Runciter is the CEO of Runciter Associates, a company that uses telepaths and pre-cogs to counteract the nefarious actions of companies, like the Hollis Agency, that use these abilities to steal business secrets from corporations. When Runciter ends up killed in a job gone bad and his team desperately try to get him to a mortuary in Switzerland before his brain activity goes cold, where he may live on as a non-corporeal entity. Only nothing goes as planned and fabric of time and space seems to be disintegrating.

Similarly to the other Dick novel I’ve read The Man in the High Castle, when I got to the end of Ubik, I was left wondering what had I just read? What does it all mean or is it just the rambling of a fertile imagination? Is Dick having the reader on or is there some deeper meaning to the text that I am missing?

It is interesting to note that Dick may have been a visionary in his prediction of a corporatized world of tomorrow in this book (everything has a cost – everything is commoditized), but like Asimov in the Foundation Series, he could not envision a smoke-free future. Even when I had a two-pack-a-day habit, I assumed (probably influenced by Star Trek) the future would not include tobacco smoking. It does make you appreciate it when a writer does get at least bits and pieces of the future (that we now live in) “right”. Not that we currently live in a smoke-free environment, but in Ubik, there’s more lighting up that in an average episode of "Mad Men". 😀

I enjoyed reading Ubik, but I have to admit that the book didn’t quite work for me as science fiction due to its farcical, over-the-top tone. It’s all pretty madcap but never very convincing. And the ending is either mind-blowing or just plain confusing. It’s almost like a koan, one could meditate upon it for eternity.