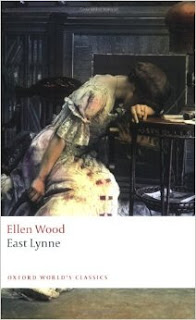 I think I might be laboring under the misconception that I love Victorian era literature. The more I read, the more I am coming to believe that I may just love Dickens and Trollope.

I was annoyed throughout most of the first half of East Lynne because the author heavily foreshadowed EVERY plot point. This is not unique to Victorian literature, of course. I also realize that this does not bother some readers; I know that people go to see Shakespeare tragedies performed even though they are fully acquainted with the knowledge of who dies at the end; however, when I read a new-to-me book, I LIKE TO BE SURPRISED. I was a little heartened when a murder mystery storyline was introduced, but then I figured out who the murderer was in about two pages …*sigh*.  I also found it obnoxious that in order for this tragic novel to work, the characters had to be completely OBTUSE and never tell anyone the truth, until it is too late, of course.


I did enjoy the second half more; I still knew which way the train of tragedy was chugging, but I was along for the ride by then and Ellen Wood had stopped telegraphing every move and got a little nutty it a sort of fun, soap opera like-way with characters showing up in disguise, some serious teeth-gnashing and self-recrimination and a wonderfully over the top deathbed scene.


East Lynne is considered a sensation novel, which means that people read it in the 1800s for its scandalous, scurrilous nature. I imagine Victorians read sensation novels in the same way one might now read true crime or harder edged fictional crime novels; the reader can address and “enjoy” their fears in a safe setting.  The back of the Oxford Words Classics paperback edition that I read (pictured above) suggests that East Lynne can viewed as specifically tackling Victorian ethical unease vis-à-vis divorce and adultery.  Personally, however, I found Lady Audley’s Secret by Mary Elizabeth Braddon or He Knew He was Right by Anthony Trollope to be better dramatizations of the difficulties that many women faced in the Victorian Era in terms of divorce laws, marriage rights and child custody.


This title was my choice for the “Classic Written by a Woman” in the Back to the Classics Challenge 2015 hosted at the blog Books and Chocolate. If you like high melodrama with lots of foreshadowing, this might be the book for you, but for my tastes, it was a bit too much.
Posted by Ruthiella at 4:27 PM 2 comments:

The Mysteries of Udolpho by Ann Radcliffe 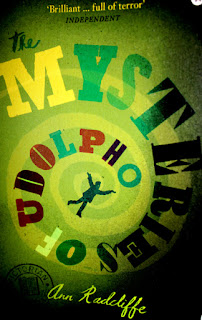 The Mysteries of Udolpho (the beautiful Penguin paperback edition I read pictured above came in at 875 pages), was my choice for the “Very Long Classic” in the Back to the Classics Challenge 2015 hosted at the blog Books and Chocolate. At first, I found this book very, very tedious.  There are ENDLESS descriptions of scenery, much of which makes the heroine, Emily, (a) cry and then (b) spontaneously compose a sonnet inspired by such landscape. These poems (sometimes pages long) are also included in the novel.


Eventually, however, I just gave in to the silliness of it all and found it almost unintentionally funny after that. I lost count of the times our Emily fainted and/or burst into tears. It is definitely worth the experience of reading this title if you want to know the kind of books Jane Austen was mocking in Northanger Abbey as this title is one of the grandmothers of all gothic romances and was apparently very popular in its time.


The story is impossible to synopsize, so much happens to Emily St. Aubert., a young upper class woman who grew up in genteel poverty despite her father’s aristocratic background (the story is set in the late 1500s, but you would never know it except for the fact that this is stated in the first sentence of the first chapter).  Suffice it to say that there are plenty of castles and mansions with secret staircases, hidden rooms, ghostly sightings, there are mustache twirling villains and hidden agendas galore, which include forced marriages, stolen inheritances and other common misunderstandings.


Normally I prefer to read annotated versions of Victorian novels. However, this edition was published in the Pocket Penguin Classics Victorian bestsellers series and they do not have any notes or introduction. Which is just as well, I suppose, since this would have made the book even longer!  I am not sad to have read it, but I think it is safe to declare that I will never read any Ann Radcliffe again!
Posted by Ruthiella at 5:44 PM 2 comments: 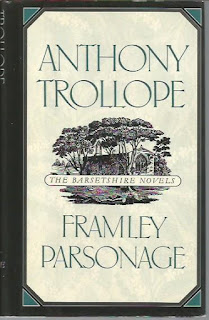 Framley Parsonage is book four in the Barsetshire Chronicles and it was my pick for the 19th century classic in the Back to the Classics Challenge 2015 hosted at the blog Books and Chocolate.  I have read the previous three novels in the Chronicles (naturally) and Framley Parsonage is similar to those preceding books in that it skewers the excess and/or abuse of power in the Church of England while also portraying a romance (or two).   There are  also a few reoccurring characters from the series that pop up in this title; such as the delightfully obnoxious Proudie family (introduced in the second book, Barchester Towers) and the rich but common Miss Dunstable (from the third book, Dr. Thorne).


However, the main story of Framley Parsonage mostly concerns itself with newly introduced characters who (unsurprisingly) live in the village of Framley.  These characters are the widowed Lady Lufton of Framley Court, her grown son Ludovic, the current Lord Lufton and Ludovic’s childhood friend Mark Robarts, who is the vicar of the eponymous parsonage and Lady Lufton’s protégé.  Mark is happily married to Fanny, a love match engineered by Lady Lufton and within the first few chapters, his younger, unmarried sister Lucy comes to live with the couple in the parsonage.


In the beginning, it is clear that Lady Lufton, while amiable and well-meaning, controls the lives of both her son and Mark Robarts.  The plot thickens when both young men begin to chaff under her control. Mark, who grew up decidedly middle class, yearns to hobnob with the upper classes, hopefully thereby bettering his prospects both professionally and socially. Lord Lufton, meanwhile, wants to marry whom he pleases, in spite of his mother’s matchmaking.

The sin of pride as experienced in multiple ways is what really moves the various story lines: Lady Lufton’s pride in her son which threatens to estrange her from him, Mark’s sister Lucy Robarts’ pride that would keep her from the man she loves, Mark Robarts pride which prevents him from asking for help when his ambition threatens to ruin him, or the struggling neighboring vicar, Mr. Crawley’s pride which will not allow him to accept charity despite the desperate need of his wife and children, etc.


I look forward the finishing of this series in the next year or so and then moving on to the Palliser series novels.  I am no expert on Victorian fiction, but of those authors I have read from this era thus far, Trollope is right up there with Dickens as my absolute favorite.  I love in particular his gentle humor and his well-rounded characters.  The edition I read (pictured above) is from a hard cover set published by Oxford University Press in 1989 which I stole borrowed from my father.  I hope he got them cheap since the first book had messed up annotations and the third book was missing about 50 pages (an obvious mis-print). But this title was in perfect condition.
Posted by Ruthiella at 5:21 PM 4 comments: