Back to the Classics Challenge 2020: The Dud Avocado 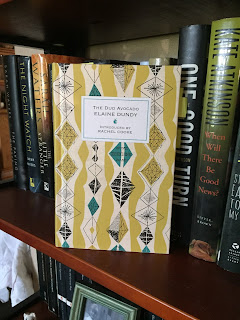 “You know, these American girls are just like avocados….” His avocado arrived and he looked at it lovingly. “The Typical American Girl,” he said, addressing it. “A hard center with the tender meat all wrapped up in a shiny casing.” He began eating it. “How I love them,” he murmured greedily. “So green—so eternally green.” He winked at me.”

Interestingly enough, three of the books I have read for a Back to the Classics Challenge 2020 have been set in Left Bank Paris.  Moving up a century and half from Trilby, The Dud Avocado takes place in the Latin Quarter in the 1950s. And similar to George du Maurier, Elaine Dundy knew of what she wrote, since like her protagonist, she too moved to Paris after World War II to live off her allowance for as long as she could. I don’t know exactly what the exchange rate was back then, but as I understand it, the dollar was amazingly strong and one could live pretty well in Western Europe on a modest U.S. income.

This was my second stab at The Dud Avocado, which I’ve owned for probably at least a decade. It was kind of a cover-buy because I really loved the pictured Virago naked hard back and sort of Gollum-like, I felt a need to possess it, regardless of its contents. I am glad I gave it another chance because I really enjoyed this novel about a footloose, slightly zany young American woman named Sally J. Gorse. Also, like Trilby, this book is pretty frank about sexual mores in the mid-20th century, though again, there are still different expectations placed on women compared to men. Possibly because the author is female, she is a little sharper in her condemnation of this gender gap. Fittingly enough, the category I read this for is “Classic By a Woman Author”.

Judging from the goodreads reviews, this is a bit of a marmite book, where either the reader gets Sally and her brand of humor and adventure, or they don’t. I did find Sally occasionally frustrating but I also I laughed out loud more than once as I read about her days and nights with the pseudo-intellectuals and American ex-pats at the Paris cafes, how she gets an acting job in a local English language production, how she is duped into a vacation in the South of France and ends up as an extra in an international film production, etc. There is a little bit of a plot arc, but really the joy of reading the book is just following Sally and wondering what she is going to do or say next.

This book gets compared to Breakfast at Tiffany’s a lot, which is interesting because actually both books were published in the same year: 1958. I can see some similarities between Holly Golightly and Sally J. Gorce in their way of living without thinking of consequences …ah youth.  Ultimately, however, they really aren’t very similar and I don’t think they would like each other, were they to meet. Sally is, for all her worldliness, fairly naïve and she lives off of a trust fund. Holly grew up poor and is a call girl (in my opinion – I know others interpret her way of living through rosier glasses) and lives off of tips from her men clients.