Back to the Classics Challenge 2021: The House of Ulloa 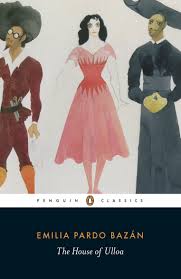 The earthy and gothic atmosphere of this 19th century Spanish classic novel reminded me at tad of Wuthering Heights in its rustic setting reflecting a landscape of corruption, cruelty and decay, only instead of the Yorkshire moors, the majority of the novel takes place in provincial Galicia. But that comparison only goes so far. Don Pedro Ulloa is no Heathcliff and Pardo Bazán  using the backdrop to tell a story steeped social satire and criticism and not that of a doomed, star-crossed relationship and ghosts.

The book is narrated in close third person through the eyes of Father Julian, a naïve, very young priest who has been commissioned to come to the Ulloa estate and manage it for the marquis, Don Pedro. However, Father Julian is entirely out of his element. The house and farms are, in fact, “run” by Don Pedro’s farmhand/huntsman, Primitivo, who has the lazy, feckless Don Pedro completely under his thumb. The more Julian tries to get a handle on the situation, the worse it becomes. When Don Pedro marries, Julian hopes this will change the balance of power on the estate, but things don’t work out as he hopes and Julian’s chaste but close relationship with the new mistress of the house is also threatened. Then, when the entire region is in the grips of a local election where Don Pedro has been made the candidate for the conservative faction, things come to a head.

One factor of the novel that I particularly enjoyed was the descriptions of the countryside, which is rough, wild and sometimes bleak but also beautiful. The comparison of this provincial landscape is juxtaposed with the dissipated and claustrophobic atmosphere of Santiago de Compostela, where Father Julian and Don Pedro go to visit the marquis’ cousins and find Don Perdo a wife.

The backdrop of the novel is the Glorious Revolution which took place in Spain in 1868 when Queen Isabella II was deposed and exiled. Of course, I know virtually nothing about Spanish history, so getting even an inkling of that background was great in the context of the novel and in the notes in the annotated Penguin edition that I read. It’s a pity that more books by Pardo Bazán are not available in English, though maybe more are in the works?  In the introduction, it was suggested she is often compared to Emile Zola, a comparison she personally disagreed with. But, while I’ve only read two books by Zola, I can see where one might make the comparison, in particular because Pardo Bazán is quite frank about the more earthy and realistic sides of life.

I read this for the Back to the Classics Challenge 2021 category “Classic by a New to You Author”. I was introduced to The House of Ulloa and Emelia Pardo Bazán by the blogger Sylvia Cachia. Thanks Sylvia!