Back to the Classics 2022: Maud Marth by Gwendolyn Brooks 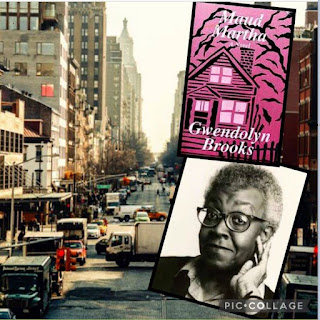 I felt like one of the cool kids when I listened to the most recent Backlisted podcast and heard that the very well-read Andy Miller had only just come across this book. And here, I read it months ago. 😆 Both Andy and I liked it a lot.

Gwendolyn Brooks received the Pulitzer Prize for Poetry on May 1, 1950, the first Black poet to receive that honor.  Though born in Kansas, she moved to Chicago when just an infant and was made Poet Laureate of Illinois in 1968. This is her only novel and it does read like a very long prose poem, so I suspect anyone who enjoys her poetry will also enjoy Maud Martha. Normally, poetry is not my thing. I often find it inscrutable. But not so Gwendolyn Brooks. Here is a sample:

"But I am certainly not what he would call pretty. Even with all this hair (which I have just assured him, in response to his question, is not "natural," is not good grade or anything like good grade) even with whatever I have that puts a dimple in his heart, even with these nice ears, I am still, definitely, not what he can call pretty if he remains true to what his idea of pretty has always been. Pretty would be a little cream-colored thing with curly hair. Or at the very lowest pretty would be a little curly-haired thing the color of cocoa with a lot of milk in it. Whereas, I am the color of cocoa straight, if you can even be that "kind" to me.

He wonders, as we walk in the street, about the thoughts of people who look at use. Are they thinking he could do no better than - me? Then he thinks, Well hmp! Well huh! – all the little-good lookin' dolls that have wanted him – all the little sweet high-yellows that have ambled slowly past his front door – What he would like to tell those secretly snickering ones! – That any day out of the week he can do better than this black gal. "

It is split into vignettes depicting trajectory of Maud Martha’s girlhood to womanhood in midcentury Chicago. Her homelife and childhood is happy, though she is somewhat in the shadow of her prettier older sister. When she marries and moves in to her own apartment, life definitely takes a bit of a turn. Her husband leaves a lot to be desired. But both he and Maud Martha are also worn down by the sometimes casual sometimes blatant racism of the era.

The middle section titled “kitchenette folks” is the longest, depicting the residents of the building Maud Martha lives in with her husband. It reminded me some in its scope (but not style) of The Women of Brewster Place by Gloria Naylor.

My edition of the novel was only 180 pages long. This is  a short novel but one which tells volumes despite its brevity and simplicity of the language.  I read this for the Back to the Classics category "Classic by a BIPOC Author" for the challenge hosted by Karen at the blog Books and Chocolate.

Posted by Ruthiella at 4:15 PM