Back to the Classics Challenge 2021 - His Excellency, Eugène Rougon 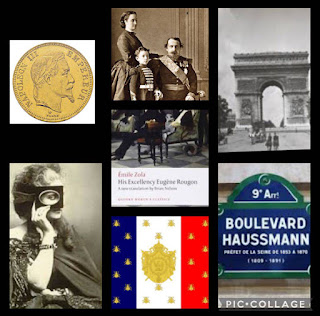 Inspired by Karen at Books and Chocolate and her enthusiasm for the novels of Emile Zola, I decided a few years ago to read all of his Rougon-Marquand series - 20 books total - in the recommended reading order (as opposed to the order of publication). This initial bout of enthusiasm lead me to read The Fortune of the Rougons waaay back in 2013.  The best laid plans of mice and men as some one once said…it only took me eight years to read the next book.  At this rate, I will be 120 or so when I am done with the series.

His Excellency, Eugène Rougon takes place fairly soon after the events of The Fortune of the Rougons. Eugène Rougon is a lawyer from the provinces who went to Paris to make his fortune and luckily (or shrewdly) put his faith in Charles Louis Napoléon Bonaparte in 1851 when Napoléon, who was then President of France, staged a successful coup and crowned himself emperor Napoléon III.  When the book opens, while the Empire is still at the height of its powers and popularity, Rougon is resigning his influential post in the national assembly. All those who relied upon him and his political power are astonished and disappointed; one by one they desert him.

But it would appear Rougon is playing a long game and when he finds the opportunity to insert himself back into the Emperor’s good graces, he strikes and soon becomes, next to the Napoléon III, the most powerful man in the country. His sycophantic hangers-one soon flock him again and all are given power, favors and positions accordingly, but eventually things go too far and Rougon, or rather one of his cronies, oversteps the bounds of his office and Rougon finds himself politically walking a fine line.

I liked this book, though it was pretty heavy on the politics and I don’t think with either this or The Fortune of the Rougons (it has been too long since I have read Germinal to remember if it is any different), that Zola is a particularly subtle writer. The best thing I found about this title was the character, Clorinde de Babi, a young, beautiful Italian noblewoman with whom Rougon becomes obsessed and to his peril, he underestimates. The introduction I read suggested Clorinde was based on the mysterious, real-life Virginia Oldoïni, Countess of Castiglione, who was one of Napoléon III’s many mistresses and a fascinating person historically. Clorinde is as politically astute as Rougon in this novel, if not more so. However, as a female, her options are limited and her power necessarily more indirect and behind the scenes.

Definitely these first two books have been a great window for me on the Second Empire historical period in France and I expect as I read on, my view will only be deepened. Though, it is very clear that Zola was no fan of the Emperor and this isn’t an unbiased view by any means. Unfortunately, though unsurprisingly, much of the political  practices criticized in the novel, the cronyism, the corruption, the abuse of power, etc. is not something left in history or unique to France or the 19th century, I’m afraid.

I read this title for the category "Classic in Translation" in the Back to the Classics Challenge 2021 hosted by Karen.