Back to the Classic Challenge 2018: Bel Ami by Guy de Maupassant

For the Classic in Translation category for the Back to the Classics Challenge 2018 hosted by Karen at Books and Chocolate, I read Bel Ami by Guy de Maupassant.  I wasn’t sure exactly what to expect. I only picked up this title last year because I had planned to buddy read it with a friend. As French authors go, I was aware of de Maupassant but never felt the urge to read any of his books; Zola and Balzac cried out to me more loudly, for whatever reason. But I am so very glad I did read this book because I loved it! 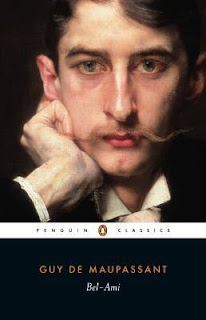 Bel Ami is chock full of despicable characters but I didn’t mind that at all. The story is about a young provincial named Georges Duroy who, when discharged from the French military moves to Paris to seek his fortune.  Georges is moderately intelligent but physically very good looking. When the book opens, he is so hard up he only has enough cash to see him through one meal a day until his next payday.  His luck turns, however, when he runs into a former acquaintance from his service days in Algeria, Forestier.  Forestier is a journalist working at an upstart broadsheet called La Vie Française run by a financier who largely uses the paper to launder money and promote politicians who support his financial dealings.  Forestier gets Georges a job on the paper too and there begins, in fits and starts, Georges rise in Parisian society as he learns, often the hard way, how to get ahead.

From the outset Georges is a venial character and the embodiment of the perfect anti-hero.  He is never satisfied with what he has and is ever eyeing others who are better off, envious of their good fortune. He is ignorant of social norms and affectations and consequently often puts his foot wrong, sometimes avoiding total embarrassment only by the skin of his teeth. Georges uses people, particularly women, to get ahead with no self-awareness or sense of shame.  With every stumble Georges made I wondered if NOW was the time he would get the comeuppance he so richly deserved.  I won’t give away whether he does or not!


Is this book a satire?  I am not sure because the behaviors and events are not exaggerated but rather all too realistic. It is very critical of Parisian society and politics without ever overtly stating so.  In some ways the plot reminded me of The Red and the Black by Stendhal which has another amoral social climber and is set in an earlier generation, but I enjoyed Bel Ami so much more!
Posted by Ruthiella at 10:45 AM