BACK TO THE CLASSICS 2018: Winesburg, Ohio by Sherwood Anderson

For the Back to Classics Challenge 2018 hosted by Karen at the blog Books and Chocolate  category  20th Century Classic” I chose Winesburg, Ohio by Sherwood Anderson.   My reason for this title over many others was due to the fact that it is short and it is included on the Modern Library’s list of the  best 100 novels of the 20th century that I have been working my way through since 1998. 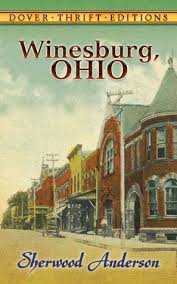 Winesburg, Ohio  is a collection of  vignettes (they are not short stories in my opinion) about certain residents of a small Ohio town in the late 1800’s, just before economy and society  moves from farming to factories.    As indicated in the first section of the book, “The Book of the Grotesque” the characters portrayed are shown in a very exaggerated, distorted way which often focuses on the unpleasant; those aspects of a person that one usually keeps hidden.

I am certainly glad to be able to tick this book off my list, but I didn’t really like it.  As short as it was, I found it difficult to read about such unhappy people over and over.  Almost everyone is yearning to escape and connect. But even those who do escape ultimately end up back in Winesburg. There are few happy exceptions.   People determined to finally express themselves lack the courage when finally faced with the opportunity.

Anderson’s writing has many admirers, Hemingway and Faulkner among them as I discovered n the introduction by Irving Howe in the Dover Thrift edition that I read.   But I found the description of the characters’ unhappiness and their expression of despair to be pretty unvaried as the book wore on.
Posted by Ruthiella at 10:16 PM