Back to the Classics Challenge 2020: Justine 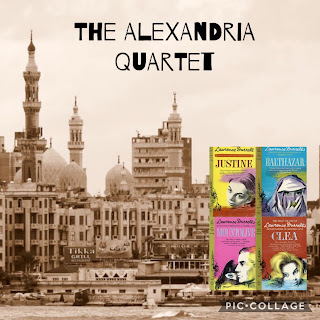 I had ambitious plans to read Lawrence Durrell’s entire Alexandria quartet for the challenge in 2020 but unfortunately, I’ve only managed the first book and don’t see myself tackling the other three in 2020. My blogging friend Major called it, when he commented on my January 3, 2020 opening post for the challenge,

“I found it impossible to understand, I was totally lost, I had no idea what the writer was doing. I was routed, utterly defeated. Not even Pynchon challenged me so.”

I’ve only read one book by Pynchon and it was pretty tough going, so I’m giving the point to Durrell here, BUT I do know what Major meant. Much of the dreamy, plotless, non-linear narrative of Justine was incomprehensible to me.

Here’s what I did get: Everybody loves Justine. Justine loves no one but has affairs left and right, possibly because she was sexually abused by an uncle as a child, the book suggests. Justine has an affair with our nameless expat British narrator. He, in turn, is in a relationship with a tubercular prostitute with a heart of gold, Melissa. Justine’s husband, Nessim, is tolerant of his wife’s behavior, until he isn’t and then he takes up with Melissa.

Here’s what I did not get at all: At some points, Durell switches to the past…maybe the Napoleonic invasion of Alexandria or maybe the Persian invasion or the Ottoman invasion…all which were centuries apart from one another. Who knows? It’s all very dreamlike and enigmatic.

As a reader, I need a lot more plot than this book provided. I usually have a tin ear for gauzy, poetic writing.  But I think the biggest problem was that even when I did understand what was happening, I didn’t care a whit about any of these people or what happened to them.  However, I know and respect other readers who LOVE these books, so I do think this is very much a matter of “reader taste”.

I read this for the Back to the Classics Challenge 2020 category “20th Century Classic”.

Posted by Ruthiella at 8:01 PM