Back to the Classics Challenge: Suite Française

My choice for the category “Classic in Translation” for the Back to the Classics 2019 Challenge hosted by Karen at Books and Chocolate was Suite Française by Irene Némirovsky. This is one of those books that meets the Challenge’s bylaws in that it was first published in 2007 but actually written in 1942. The story of the author’s life and how the book came to be published is worthy of a novel itself. Némirovsky was originally from the Ukraine (then part of the Russian Empire) but had immigrated to France with her family as a teenager. She was a popular and well-known author in France. Her debut novel David Golder was a best seller and published when she was only 26 years old.

However, when France surrendered to Nazi Germany in 1940, Némirovsky, as a woman of Jewish ancestry and denied French citizenship, began to feel the pressure put upon Jews by the French government under the occupation. Ultimately, she was deported to Auschwitz and murdered (she died actually of typhus but let’s call a spade a spade. There was never any intent that she should survive her deportation). Her daughters survived the war hidden by friends of the family. Némirovsky’s oldest daughter, Denise Epstein, had kept the manuscript but not read it thinking it was her mother's journal and fearing the experience would be too painful. When she later discovered it to be an unfinished manuscript she approached a publisher and the rest is history. 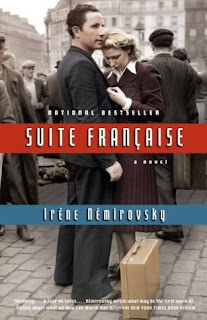 The novel Suite Française is the first two sections of what the author envisioned as a five-part chronicle of life during wartime under the occupation. Némirovsky was writing as the actual events were unfolding.  The first section is titled “Storm in June” and it depicts an ensemble of characters as they flee Paris at the onset of the invasion in 1939. It reminded me a bit of The Grapes of Wrath in how the best and the worst in people will come out in desperation as people traveled on foot or in vehicles with as much of their worldly possessions as they could carry with the situation becoming more and more dire the further they went. It was very vivid.

The second section titled “Dolce” is a little less tense and definitely more romantic. It takes place in a village located in Vichy France where German troops are sequestered and the characters are only tangentially related to those introduced in the first section. The story’s focus is an unrequited love affair between a French woman and a German officer with other characters showing some of the initial signs of underground resistance by the French and the burden of collaboration.

The edition I read had notes from the author at the back which give hints as to where the final volumes were headed plot wise.  I think the final version would have been epic and an instant classic had the author lived to write it.
Posted by Ruthiella at 11:10 AM 19 comments:

Back to the Classics Challenge: Cannery Row and The Scapegoat

I read two books for the Back to the Classics category “Classic from a Place You’ve Lived” for the Back to the Classics 2019 Challenge hosted by Karen at the blog Books and Chocolate and both are thanks to Jane who blogs at Reading, Writing, Working, Playing who encouraged me to read Cannery Row by John Steinbeck back when I posted my potential list in January 2019 and who wrote such an appealing review of The Scapegoat by Daphne du Maurier last month that I was impelled to read it right away. I even had an old Book of the Month hardcover edition of it, inherited from my mother. Another encouragement to read both was the fact that Cannery Row is so short; It wasn't stressful to read both books.

The Scapegoat takes place in France (in a village called St. Gilles somewhere in the Northwest) and I lived in Bordeaux, France for a year in the late 1980s when I was in college. Later in the early 1990s I lived for a year in Monterey, California. I know I visited Cannery Row at least once while there, but I only remember it as being very “touristy”. I have fonder memories of the Monterrey Aquarium.

My journey through Steinbeck’s works has been up and down. I first read Travels with Charley, which I loved. But then I read East of Eden which I didn’t love. But when I read The Grapes of Wrath a few years ago, I was very impressed with the writing and that positive impression carries over to Cannery Row as well. The descriptions are vibrant and colorful. 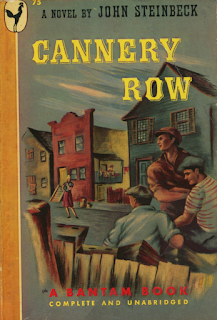 Cannery Row in Monterey in California is a poem, a stink, a grating noise, a quality of light, a tone, a habit, a nostalgia, a dream. Cannery Row is the gathered and scattered, tin and iron and rust and splintered wood, chipped pavement and weedy lots and junk heaps, sardine canneries of corrugated iron, honky tonks, restaurants and whore houses, and little crowded groceries, and laboratories and flophouses. Its inhabitant are, as the man once said, "whores, pimps, gamblers and sons of bitches," by which he meant Everybody. Had the man looked through another peephole he might have said, "Saints and angels and martyrs and holymen" and he would have meant the same thing.

The book is collection of semi-connected vignettes about the inhabitants of the row, most featuring Doc, a marine biologist/procurer of marine animals, Mack the leader of a crew of lay-abouts, Lee Chong, the grocer. There is virtually no plot. At best, one could say that it is about Mack and the boys wanting to throw a party for Doc which goes awry. In some cases, Steinbeck borders on clichés with some of his characters, particularly that of the hooker with a heart of gold, but generally I found the characters to be realistically flawed and it was clear that Steinbeck had a real affection for all of them, whatever their moral weaknesses. 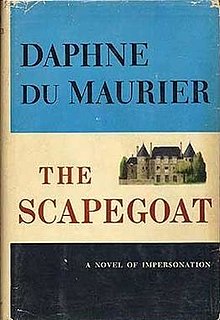 My history with du Maurier is equally mixed. In brief, no book has quite lived up to Rebecca in my estimation. But nonetheless, The Scapegoat was an interesting and propulsive read and boy does it have a plot! Two men meet by chance in Le Mans, France and they are by all accounts identical. One is an Englishman named John, a professor of French history whose command of the language is that of a native. The other is a French count called Jean.  I won’t say how, but in true soap opera tradition, they end up switching places.                                                                                            The book then follows mild mannered John who sees the chance to live another person’s life both a challenge and freeing. John is an orphan and a loner who has always had difficulty connecting to other people. When he steps into the rather profligate Jean de Gue’s shoes, he is thrust into a complicated familial and cultural situation that invigorates him. The book almost reads as a thriller as John navigates one tricky situation after the next. And at any time, the real Jean could return and then what? The Scapegoat’s plot is completely implausible yet du Maurier makes it believable.  My only niggle was the ending but not because it was a bad; it just didn’t end the way I wanted it to.

Email ThisBlogThis!Share to TwitterShare to FacebookShare to Pinterest
Labels: BACK TO THE CLASSICS 2019
Newer Posts Older Posts Home
Subscribe to: Posts (Atom)