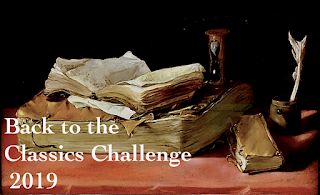 Hamlet was the last work I needed to read to complete the Back to the Classics Challenge 2019 hosted by Karen at the blog Books and Chocolate. 😃 Below is the summary of the 14 works I read:


I really enjoyed everything but if pressed, my favorites would be A Glass of Blessings and The Way We Live Now.

I’m not sure if Karen is going to keep on hosting this challenge in 2020 – I’m crossing my fingers that she will. because I really do find it helpful to structure my reading and get in those classic titles I’ve been meaning to read.  I wish any of you, dear readers, luck in also completing the challenge. Remember, you only need to have completed six categories to be successful!  😌 My contact is naessa[at]yahoo[dot]com
Posted by Ruthiella at 7:57 PM 27 comments:

Back to the Classics Challenge: Hamlet 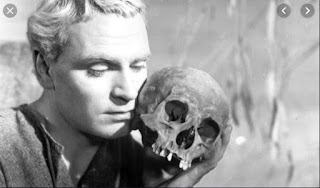 Well, rather surprisingly to me, the Classic Play that I read for the Back to the Classics Challenge hosted by Karen at the blog Books and Chocolate was Hamlet.  I was initially considering reading more Oscar Wilde and then I though instead maybe some Sheridan based on Reese’s excellent review of School for Scandal at the blog Typings.  I was looking for, you know, something light and comedic. Instead I read Shakespeare’s longest play and a tragedy to boot. I have a very good friend who teaches English and she convinced me to read it with her so we could discuss it since she is considering teaching it in future. Her go-to for teaching Shakespeare is Macbeth, which she can quote, amazingly to me, by heart.

I think like many readers, I was familiar with the play prior to reading it. I may have read it in high school or we may have only read the famous “to be or not to be” soliloquy…the farther I get from my teen years, the more trouble I have remembering the details. But regardless, like Romeo and Juliet, Hamlet has permeated the culture of the English speaking world by osmosis. Originally I wanted to listen to it on audio in tandem to reading the text, but since it is such a long play, I couldn’t find an audio book with the full four and half hour production.

Like I said, I knew the story (and am assuming you, dear reader, know it too), so what is my take away from the play? I was surprised that Hamlet is so morose. As I read, I pictured him as a tortured, goth teenager moaning about his parents and how unfair life is. I do understand that Hamlet does have legitimate cause for complaint; his father had been only dead for two months and no one seems to care or notice. However, I did find him particularly mopey-just my take. I understand from a little internet research that there are a multitude of ways to play and interpret Hamlet, so I may have been reading into it, since I was a pretty mopey teenager myself once upon a time. I also didn’t know that Polonius is supposed to be such a pompous windbag and I had assumed that Queen Gertrude was complicit in Hamlet Sr.’s death, but she appears to be innocent. Clearly there were many details I was unaware of and I am glad I read it and set the record straight. Maybe one of these days I will watch an adaptation or even see it live now that I am better acquainted with the play.

One other thing I really enjoyed was discovering a lot of phrases that I already knew but did not know came from this play. A few examples are below:

“…though I am native here and to the manner born, it is a custom more honored in the breach than the observance.”

“Though this be madness, yet there is method in’t”

“The lady protests too much, methinks.”

My friend and I had an interesting discussion on what we felt was the ultimate message of Hamlet. I wasn’t expecting a moral but she was, since she feels that Macbeth makes a clear point about the dangers of ambition. We decided there really isn't any one moral conclusion to Hamlet. Which is probably in part why the play has endured since it is so open to interpretation.

Email ThisBlogThis!Share to TwitterShare to FacebookShare to Pinterest
Labels: BACK TO THE CLASSICS 2019
Newer Posts Older Posts Home
Subscribe to: Posts (Atom)